It sounds better in Cantonese

It couldn't be more obvious now that this Joshua Wong is another CIA stooge, here he is meeting with the Leader of the Al Qaeda white helmets Color revolutionaries of the world, unite! Hong Kong protest leader pictured with White Helmets boss
B

Our boy Joshua has some strange friends in the world of regime change. 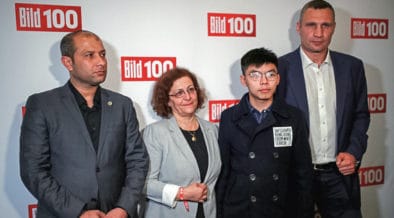 Hong Kong Protest Leader Joshua Wong has shown himself to be a pawn of US foreign meddling by meeting with White Helmets boss Raed Al Saleh. 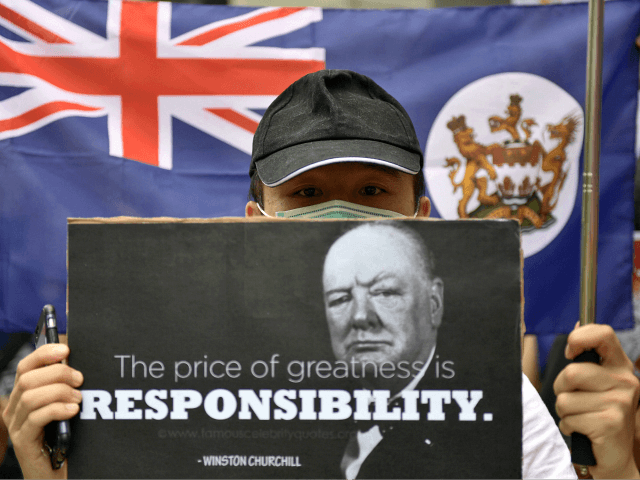 Pro-democracy protesters rallied outside Britain’s consulate in Hong Kong on Sunday, demanding London
do more to protect its former colonial subjects, and ramp up pressure on Beijing over
sliding freedoms.

Hundreds of demonstrators sang “God Save the Queen” and “Rule Britannia” outside the consulate, waving
the Union Jack as well as Hong Kong’s colonial-era flags.
OP

I’m on my way there today.
Maybe I’ll send a report.

Yonghoi said:
I’m on my way there today.
Maybe I’ll send a report.
Click to expand...

Think I might be tempted to stay to stay in an air conditioned hotel all day, the alternative is trying to fit in three showers a day, the heat and humidity can be a bit mad at this time of year.
B

I am heading down to Wanchai to get a beer and the roide, Sunday gee-gees at Sha-tin and Wednesday Party night at Happy Valley.
OP

Access to the airport express station is all changed. Only one entrance open and is heavily manned by security people. Some damage to glass panels.
Pity this site doesn’t allow upload of pics.
OP

TheWexfordInn said:
Think I might be tempted to stay to stay in an air conditioned hotel all day, the alternative is trying to fit in three showers a day, the heat and humidity can be a bit mad at this time of year.
Click to expand...

I’ve some biz to do Wex, so I’ll be out and about.

bells of shandon said:
I am heading down to Wanchai to get a beer and the roide, Sunday gee-gees at Sha-tin and Wednesday Party night at Happy Valley.
Click to expand...

Wanchai is ground zero. Not on the agenda. And I’ve never been a betting man.
But a pint or two in Kowloon tonight is on.

Mobile network noticeably slower than the usual blazing speed. The chicomms must be throttling it.

bells of shandon said:
I am heading down to Wanchai to get a beer and the roide, Sunday gee-gees at Sha-tin and Wednesday Party night at Happy Valley.
Click to expand...

You have just given me a flashback to the time I stayed at the Cosmopolitan Hotel where I had a view of Happy Valley out of the Window. Although there was nothing going on there the days I was staying.
OP

So I was out and about in Hong Kong today. A lovely rare clear sunny day. Temperature and humidity not bad at all, and all the young ladies were out in their summer attire.
Last time I was here was in May, just before the protests, and at the time I was really aware of the huge surge in numbers of shoppers on the streets. Mostly Mainlanders brought in on the newly opened Zhuhai Bridge which now links Hong Kong to Macau and the hinterlands of Guagdong Province. Nathan Road was like a mosh pit - very unpleasant. But now the numbers have definitely declined. The Mainlanders are staying away. Good.

I actually did end up in Wanchai in the morning, to do some biz locally. I had a look around Wanchai Station, but aside from a couple of broken advertising screens there was little evidence of damage. Certainly not the conflagration I expected to see.
There was one major event - a MTR train had derailed near Hunghom, and it was causing delays. There was no word as to what caused that derailment - but suspicions are there. I'll post any news later.

The main event of the day for me occurred around luchtime when I was back in Kowloon. I was walking through the office workers on luchbreak, heading toward WingOn Plaza when I heard a crowd ahead. As I got closer I saw a large group of office workers - all in normal office attire, no masks, standing in front of New Mandarin Plaza. They broke into song together - and the song they sang was the new 'Hong Kong Anthem' I posted the link to above. As it ended they cried out 'long live Free Hong Kong' , then they peacefully broke up and walked away.
It was a most heart warming thing. These are the ordinary people of Hong Kong, and the people of Hong Kong are together in their resistance, God Bless them.
68 More Posts...
You must log in or register to reply here.
Share:
Facebook Twitter Reddit Pinterest Tumblr WhatsApp Email Link
Top Bottom