None of them from India. Calling Native Americans "Indians" is either a sign of complete ignorance of geography - or brutish Planter racism.
Shaheed General Qassem Suleimani
Murdered by cowardly criminals
Ar dheis Dé go raibh a anam dílis​
OP

I see the coup plotters have made a new "law" that "exempts the police and army from any criminal liability" for whatever they do "to restore order."

That's what you call a full on Fascist dictatorship.
OP

This is an excellent article, which gives a full account of the terrorist coup in Bolivia, and the role of the US Régime in it. An interesting point is that while the Mexican plane was in the air, carrying Morales to Mexico, countries in the path of the flight started withdrawing permission to cross their airspace. Only the US Régime could have organized this and put so much pressure on these states. It's clear that the Trump Régime did not intend Morales to survive the coup. They wanted him dead. 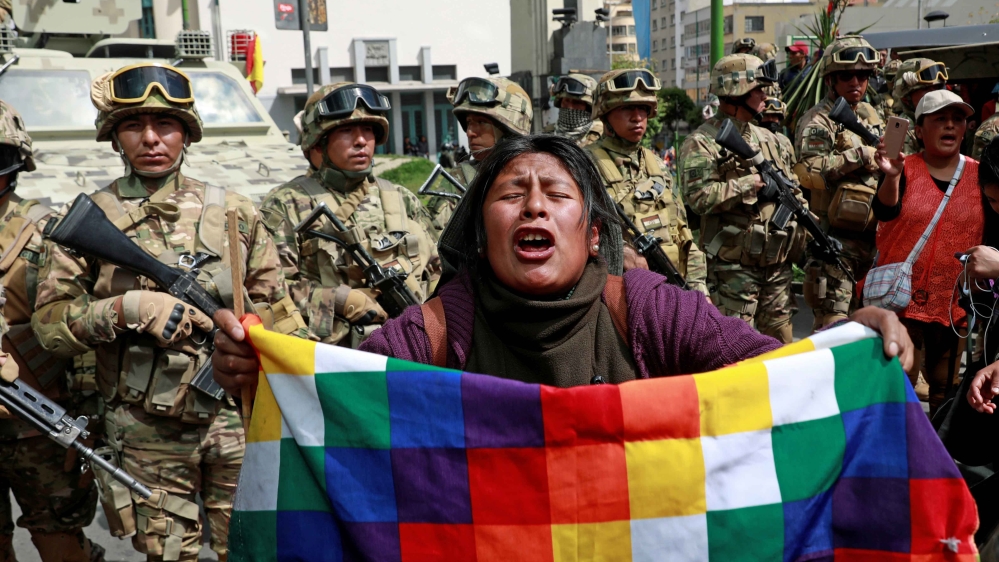 The situation in Bolivia will get worse before it gets better

The violent ways of the opposition which took power from Evo Morales threaten the future of Bolivia's democracy.

How lies from the US Régime funded "Organisation of American States" gave a political fig leave to the Neo-Nazi racist coup. The gangsters who run the OAS were central to the coup plot.

The Organization of American States Has Deceived the Public, Terribly, on the Bolivian Election

Respected news station Telesur got the boot out of Bolivia already.
So much for freedom of the press!
"If they can get you asking the wrong questions, they don't need to worry about the answers." -Thomas Pynchon

I see the illegitimate Bolivian government has renewed ties with that other fascist state: Israel, not two weeks after deposing of the Palestinian-supporting Morales.

Who'd a thunk it.
OP


The Argentinian Delegation in Solidarity with Bolivia, which arrived in the country to carry out work on human rights violations, denounced Saturday the de-facto government is committing “crimes against humanity” since the Jeanine Áñez ceased power.

The delegation spoke of “systematic violations of human rights” after having corroborated crimes such as “forced disappearance of persons,” “situations of torture in public spaces,” “rapes and sexual crimes” and “the lack of due process for detainees" among other crimes that account for "the terror situation" that they encountered during their visit to the Andean country.


While the rapporteur from the Inter-American Commission on Human Rights (IACHR) Francisco Jose Eguiguren announced that it is "it is necessary to form an interdisciplinary and international group of experts to investigate the violence...because there is no guarantee for an impartial internal investigation.”


The members also said that Bolivia suffered a coup d'etat perpetrated by groups from business sectors, the police and the armed forces that consummated the resignation of Evo Morales and established a de-facto government.


This coup said the delegation also had “explicit support” from foreign countries such as the United States and deepened after the “preliminary report” of the Organization of American States led by Luis Almagro, on alleged irregularities that have not yet been presented in a final report.


“We have verified that the repressive system set up by the de facto government has caused dozens of deaths, hundreds of arbitrary detentions, thousands of wounded, innumerable cases of apprehensions, torture, rape and other crimes against the physical, psychological and sexual integrity of the victims, who are men, women, children, elderly and members of groups,” they said.


The Argentinean delegation also highlighted the “coordinated massacres against the civilian population,” referring specifically to the repressive attack in Senkata, La Paz, when the military opened fire on a fuel plant, where 10 people were killed by gunshot wounds.

<p>In a press conference on Saturday, members of the delegation presented the preliminary conclusions on the human, social, political and cultural rights situation of the Bolivian people.</p>

Morales Vows To Do What's Best for Bolivia, Not Afraid of Jail


The President confirmed that he will be "where he serves more" to the Bolivian people and their political party, whether in asylum in Mexico or imprisoned in Bolivia.

The democratically elected President of Bolivia, Evo Morales, said Sunday that he would value the option of being imprisoned in Bolivia, if that action helps the Bolivian people, who suffer from a climate of anxiety and instability after the coup d'etat driven by the right of the South American country.

During an interview with the Argentinian publication Page 12, the Bolivian President said he has "a deep internal debate about what to do." Morales, who is blocked from running in the upcoming elections, will influence the election of the presidential binomial of the Movement To Socialism (MAS).

Morales Vows To Do What's Best for Bolivia, Not Afraid of Jail

<p>The President confirmed that he will be "where he serves more" to the Bolivian people and their political party, whether in asylum in Mexico or imprisoned in Bolivia.</p>

"This is sinister. Bolivia's Army delivered the highest award of military merit to de facto president Jeanine Añez. The coup continues, the death toll accumulates, the repression does not halt and they congratulate each other for breaking a country."