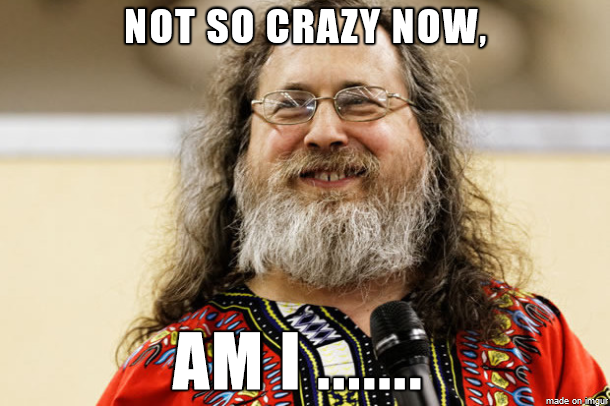 For two decades, a huge flaw (or NSA/CIA requested features?) has "existed" in each new version of intel's chips which could allow access to everything on your machine. What a shocker eh?
No wonder they call them INTEL!!

It's led to the publishing of info on two exploits called MELTDOWN and SPECTRE
Woo-yay, Meltdown CPU fixes are here. Now, Spectre flaws will haunt tech industry for years
Meltdown and Spectre: Here’s what Intel, Apple, Microsoft, others are doing about it


This flaw is not to be confused with Intel's MME which is a whole chip inside your chip
which also has access to everything on your machine.
(hard to keep track on all the nasty little ways there are for spooks to look at your computers isn't it!)

Intel's Management Engine is a security hazard, and users need a way to disable it
Intel x86s hide another CPU that can take over your machine (you can't audit it)

I said Intel, but of course these problems are not limited to Intel chips. They affect others too including the ARM based microprocessor chips on your mobile phone and ipad etc.

How will this affect you?
How the Meltdown and Spectre security holes fixes will affect you | ZDNet

This exploit can be used by javascript code to read information from your computer so for now, you should use the latest firefox browser and install "noscript" add on and block all scripting on untrusted sites. Update your operating system to get the patches for MELTDOWN and then pray that something can be done about SPECTRE!

As for all your Ipads and Iphones which are also affected? Best thing is to not to keep anything on those that can compromise your financial security or your marriage because for now they are all rightly fucked

If you just bought an iphone X then please stop crying. You probably deserve everything coming to you. And the iphone XI will likely be out next autumn and you should have saved the 2,000 euro needed by then! :smiley:

Should be a good year for sales of new computers and devices though...If apple and intel and others can quosh all the class action suits that is! Typical. The creators of the problem may even end up profiting from the situation with increased sales of next gen microprocessors. and devices!

I'm happy in a way though because it all serves as a useful platform to raise awareness of the rather secretive Intel MME which was quite deliberately built into intel chips.

UPDATE: Apple has actually patched the latest ios (11.2) and macos (13.2) for MELTDOWN in December patches, and Microsoft have released some updates to mitigate the effects of MELTDOWN in 3rd Jan patches, but microcode patch is needed from intel, and your Antivirus software will need patching too or it may crash your machine horribly. Updating your OS, your browser and installing addons like "noscript" should help make you a small bit safer from MELTDOWN exploits at least. Might be an idea to disable wifi / unplug ethernet cable from your devices when not specifically using the internet

However none of these companies can do much at present about a determined hacker who is fluent in the details of the SPECTRE exploits and malicious scripting techniques (this no doubt includes CIA/NSA spooks, MI6 and the Mossad programmers behind the likes of STUXNET etc who have probably been exploiting these flaws for years). Fundamental aspects of processor design itself will need a rethink. Brand new redesigned processors will be the only thing to solve this issue in the longer term. Meanwhile these "patches" may cause speed hits of up to 30% in certain software. Nothing however will be done about the Intel ME which is intentionally built in to your machine at your expense and which can spy on your computer any time it wishes, sending your data to whoever is driving this agenda without you ever being made aware it is happening. That is of course different. That's a government/corporate engineered and approved backdoor into all our computers. Nothing wrong with that at all. Go back to bed serfs. Your cuddly Stasi government/corporate leadership have things all under control.

Looking forward to some very interesting wikileaks in 2018 though!! Because our overlord lizard scum use intel processors too and not all hackers are greed driven crooks( like they are), and now these folks have an interesting new avenue of "research"!
Squeaky bum time for the elites??
Last edited: Jan 7, 2018
Click to expand...

Everything has been designed to have a back door, its standard for technical supports but its also part of a bigger agenda to have all electronic equipment server a double purpose.

Just how people accept those Alexa/Google devices strikes me as plain stupid.
OP

Flamer said:
Everything has been designed to have a back door, its standard for technical supports but its also part of a bigger agenda to have all electronic equipment server a double purpose.

Just how people accept those Alexa/Google devices strikes me as plain stupid.
Click to expand...


Your smartphone has google / siri voice recognition software and includes a microphone. It's no different really.
That microphone can be turned on remotely any time. As can the camera.
Your game console can likely do much the same thing. So can your laptop webcam.
Modern TVs have been shown in the Snowden leaks to be capable of spying on people and uploading it
and this was documented and leveraged in the CIA leaked software files.
This is just barely scratching the surface. The fact is the devious subtlety of software spying goes way beyond
the technical awareness of most of the population at large

There is no end to this totalitarian tech and people seem to be wilfully ignorant of the all pervasive nature of it
and are, IMHO, sleepwalking into a technological dystopia
"If they can get you asking the wrong questions, they don't need to worry about the answers." -Thomas Pynchon
G

Most People Don't Even Realize What's Coming. Will you get lost in the Fourth Industrial Revolution?

The dystopia is already here, its more a matter of how deep it goes. The smartphone has made it so half the time people act like computers with a human attached to it. Its pathetic looking at people in public. We have an extremely sick society that has no common core values associated with it, and it is technology that is filling the void. It is by design and the end goal is default slavery to a corporate technocracy.
EVERYBODY'S POLISH | MEET THE BILDERBERGS | SHATTERING THE NATION | CENSORSHIP YES | DEMOGRAPHIC PONZI SCHEME
OP

Reading privileged memory with a side-channel

Posted by Jann Horn, Project Zero We have discovered that CPU data cache timing can be abused to efficiently leak information out of mi...