Scandal after scandal have rocked the Roman catholic church both here and abroad.
The latest one involving the resignation of bishops in Chile for yet another awful sex abuse scandal.

The church have been shown in Ireland and worldwide to be guilty of systematic cover up of child abuse
and the relocation of known child abusers. 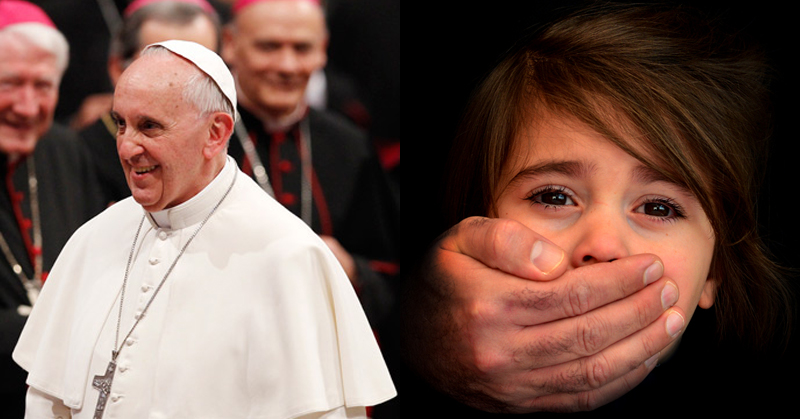 Then when compensation was required for the Irish victims, the church conspired to limit it's liability
by lobbying political allies ( Take a bow Michael Woods FF you rotten scumbag! ) to limit the church's losses by making the Irish taxpayer foot most of the bill
while cynically moving it's assets into offshore trusts so they were no longer accessible.

Effectively they made the victims pay their own compensation through their taxes.

And even though the church were meant to pay a certain small amount of the total bill, much of even this small portion remains unpaid.

Now the head of this VERY rich foreign religious organisation that has quite literally been screwing us for decades and decades,
is gracing us for a 30 hour visit in August 2018.

It is estimated that the visit will cost 30 million. 40 million if we take into account the cost of the state providing security for the pope and his privileged entourage.
This works out at about 1.3 million per hour of his visit which will include just two public appearances, one in Dublin and one in Knock. These will amount to just a few hours out of the 30. I estimate most of the rest of the time will be taken up with travel, eating, resting and no doubt some private church business.

Now given that compensating for the child abuse this organisation perpetrated and then systematically covered up over decades has cost us a fortune to date and that they have not co operated fully in releasing requested files on the sex abuse scandals, and that this organisation is sitting on a veritable mountain of riches, is it appropriate for the beleagured Irish taxpayer to be underwriting this visit in any way? Especially at a time when 40 million would be much more appropriately targetted at housing some of the homeless or paying for a few more frontline nurses and hospital beds here in Ireland than using it to provide an ephemeral 30 hours of comfort and security for a rich and powerful fatcat heading a global religious organisation that can well afford to underwrite it's own propaganda excursions itself!!

Let Rome pay for this nonsense! It's time we stopped pandering to Religion.
Click to expand...

Well just like the Queen and Obama, the Irish taxpayer pays it all.

Apparently its great for tourism, it's not just Irish Catholics who will go see the pope, you will get people from all over the UK and even America come and see his holiness.

Meh- Catholics are tax payers to you know. Anyway I wish he wasn't coming because he is bound to say something utterly retarded that my sister and my Russian friend will pick up on and badger me about.

All true Catholics should boycott. It's an absolute disgrace he arranged to come a month after the genocide vote. That confirmed exactly what he's all about.

I shall not be going anyhow,

As a Catholic, I do not see him as my pope.
“ Once you eliminate the impossible, whatever remains, no matter how improbable, must be the truth.“​

We have Harry & Meg in July

FightingForTheBull said:
All true Catholics should boycott. It's an absolute disgrace he arranged to come a month after the genocide vote. That confirmed exactly what he's all about.
Click to expand...

We certainly will. The only good thing I can think about him is that he has put to death the myth of Jesuits all being super-intelligent.
OP

We have Harry & Meg in July

Piedom said:
Well just like the Queen and Obama, the Irish taxpayer pays it all.

Apparently its great for tourism, it's not just Irish Catholics who will go see the pope, you will get people from all over the UK and even America come and see his holiness.
Click to expand...

RedFusion, Is your logic "we are already guilty of doing other stupid things therefore we should do this stupid thing too"?
Personally I don't consider that very logical at all!

I would be against Irish taxpayer money being wasted on disgusting royal parasites too.
They can also afford to foot their own bills given their huge land holdings, property portfolios
and what they extract off the backs of the english taxpayers each year.

As for Obama?
The head of the richest country in the world's visit being underwritten
by a small island with a batshit economy and creaking public services?
This makes absolutely no sense either!

As for the tourism thing, that tired old chestnut sounds like the usual argument for hosting the olympics.
Which usually results instead in bankrupting host countries.
But the same argument keeps being trotted out.
Last edited: Jun 19, 2018
"If they can get you asking the wrong questions, they don't need to worry about the answers." -Thomas Pynchon
B

'You have to have your principles' - singer Declan O'Rourke turns down invite to perform for Pope Francis - Independent.ie

Some random person that few have heard of has principles.

'I feel the Catholic Church is responsible for so much suffering in this country,” he said.'

I wonder. You could argue that the HSE has caused so much suffering in this country. Or the British, or the bank bailout or Labour or so many other things. Boycott the lot of them. I wonder does the pope actually give s shit about him and his moral principles? Not that so give two fucks what either think. It's just a bit of our EU government anti Catholic propaganda anyway.
D

GUEST
That money should have been spent fighting abortion. I was annoyed that there was a collection on all of the Catholic Churches this Sunday for the expenses of the Pope's visit - but no collection to save Irish babies from torture and mass murder. That really shows how completely lost and brain damaged the Catholic hierarchy are.

Wasn’t there enough American money
not everyone who wanders , is lost
D