Súil amháin ar an mbóthar - One eye on the road

The Native Americans and the Gaels - Na Tùsanaich is na Gàidheil

The Gaels who emigrated to Canada lived alongside the native peoples of the First Nations. In Nova Scotia, evidence shows that the native Mi’kmaq people and the Gaels had an effect on one another. The Gaels picked up new words from the languages which surrounded them.

‘Òran nam Mogaisean’ was composed by Murchadh MacArtair, after he learned about moccasins from his Mi’kmaq neighbours in Newfoundland. Moccasins are leather shoes and the word ‘moccasin’ is a native word meaning ‘shoe’. - A new life in Canada

James Ryan got started,
with a piece of hide for the moccasins,
Although he tanned the ankle leather,
They weren’t yet soft enough.

When I go down to mass,
In the company of the lasses,
They can’t say a word of prayer,
For staring at my moccasins.

'MacCrimmons Lament A Jacobite song lamenting the loss of a piper during the rebellion of 1745.This melody was written by the MacLeod’s piper, Donald Ban MacCrimmon, during the Jacobite rebellion of 1745. Accompanying Chief Norman MacLeod of MacLeod on the Hanoverian side of the rebellion, Donald Ban was captured in December at Inverurie by Jacobite forces, and such was his fame at the time, that the Jacobite pipers all went on strike to protest against his detention.'
OP

The Power of Song as the Voice of the People
OP

Over 6 months after Traveller ethnicity was recognised - what has changed?

The campaign for this recognition came into being because people considered the State’s treatment of the Travelling community as discriminatory – the outcomes of which span across areas including housing, education, healthcare and employment.

The campaign was also launched despite a backlash of hate towards the Travelling community, where accusations of violence and criminality against some have tainted the entire population.

He says that since ethnicity has been established “there’s a buzz around Travellers” and there’s been an interest in crafts that form part of the culture.
“The lads would be ringing me on a Wednesday or Thursday because Friday couldn’t come quick enough,” he said.

At the beginning, five men took part in the workshop every Friday, but one man got a job, and another got a place at another workshop, so that left them with three.

“And in hindsight, five was way too many because we didn’t have enough tools.”

The Travellers’ tinsmithing trade was born out of practicality: they’d travel around selling their creations or swapping them for other goods.

At the workshop, participants were taught to make Tommy cans, a type of flask; a Billy can, a bigger-shaped round canister for sugar and tea; a coal shuttle and custom made buckets for various uses.

The lads were asking afterwards: ‘Can we do another 10 weeks?’

There’s also a market for more ornamental tin creations, too.

Last month, Michael D Higgins was presented with a pin made by James Collins to honour the recognition of Traveller ethnicity.

“Wearing this pin is a way of expressing support for the inclusion of Irish Travellers in Irish society,” said Martin Collins, a co-director in Pavee Point.
The wheel represents the uniqueness of Traveller identity and culture, and the harp asserts our Irishness and the role we have played and will continue to play in Irish society. 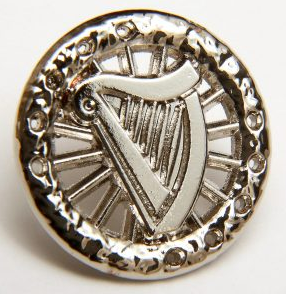 Collins says that if he’s honest, he’s “disappointed” with their interaction with the Department of Education: “It’s been really difficult and quite challenging – even up to this day.

He says that the government needs a new strategy for Travellers’ education as the 2006 one is too old, and it needs to implement the strategy from this year, that the Travelling community helped to put together.

“Travellers want to be barristers, teachers, gardas, doctors, architects. There is that ambition in the community, but unfortunately the opportunity is missing.

“It’s demoralising, these people want to become architects and gardas, but the opportunities are too far away for them. There’s a mismatch for the growing ambition in the community and how the State responds to that.” - Over 6 months after Traveller ethnicity was recognised ... - TheJournal.ie
OP

The post you are complaining about mentions Shelta more than once!

'I wish no harm to any human being, but I, as one man, am going to exercise my freedom of speech. No human being on the face of the earth, no government is going to take from me my right to speak, my right to protest against wrong, my right to do everything that is for the benefit of mankind. I am not here, then, as the accused; I am here as the accuser of capitalism dripping with blood from head to foot' - John McClean
4 More Posts...
You must log in or register to reply here.
Share:
Facebook Twitter Reddit Pinterest Tumblr WhatsApp Email Link
Top Bottom