The Flag stays, the Republic Stands, the 32 counties are ours, the immigrants can go home, the punt's coming back. Abortion never. European federalism can go to hell.
Seo libh canaídh amhrán na bhfiann​

God that Gary Gannon is a knob. He's on every PC bandwagon going. Repeal, gays, asylum seekers.
A

If someone with the intention of going into public office in this country, someone that is in DP, can lie through her teeth in full glare of the media, that doesn’t say much for the veracity of some of those in DP who spin out various yarns to the authorities.
How many in DP have been sent away from Ireland in the past, say, two years? And did they return here?
J

This is a major problem for the Social Democrats with its two leaders. It really should have done some background checking.
Regards...jmcc

Ellie's twitter page opens with the phrase 'a proud mother'. She left her twins in 'dangerous' Malawi and they only came to Ireland in their mid teens!
R

Gannon will be elected in May but not many more.
OP

jmcc said:
This is a major problem for the Social Democrats with its two leaders. It really should have done some background checking.
Click to expand...

Imagining that they didn't.

Statistics on Immigration and Refugees in Ireland
C

Kershaw said:
This would explain why she has not been able to avail of the secret scheme granting failed asylum seekers the right to remain in Ireland if they've been here for five years. That scheme is not open to people with a criminal record.

The first female asylum seeker to stand for election in Ireland has given inaccurate information about her background, The Sunday Times has established.

Official details on Ellie Kisyombe’s entry into Ireland do not match the account the Dublin city council candidate has given in recent media interviews. It has emerged that Kisyombe, a Social Democrats candidate in May’s local elections, attempted to claim asylum in the UK before being transferred back to Ireland, where she already had a student visa.

In the interviews and in her profile on the Social Democrats’ website, Kisyombe, who canvassed in the north inner city yesterday, says she came to Ireland in 2010. She immediately went into the direct provision system after claiming asylum at Dublin airport.

However, The Sunday Times has established that Kisyombe studied at Bristol University between 2007 and 2010 before returning to Malawi. She arrived in Ireland on or about April 30, 2011, and was granted a student visa that allowed her to remain here to study until June 15, 2012.

Soon after arriving in Ireland, Kisyombe travelled to the UK where she applied for asylum. In July 2011 she was screened at the Croydon asylum unit in London. British authorities asked their Irish counterparts to take Kisyombe back, in line with an EU convention. Kisyombe applied for asylum in Ireland on November 9, 2011.

In her media interviews Kisyombe says she has been in direct provision since coming to Ireland. However, she left Ireland to go to the UK in either late 2012 or early 2013.

On March 3, 2014, Kisyombe was arrested and placed in detention in the UK on suspicion of illegal entry. This resulted in a second request by UK authorities to have her removed to Ireland. She was brought back on May 2, 2014.

Asked to comment on the discrepancies in her public statements, the Social Democrats candidate said there were explanations as to why details she had given did not match what had been established by The Sunday Times, but she did “not want to go into it”. She added that, as her asylum application was ongoing, she had “decided not to speak about it”. 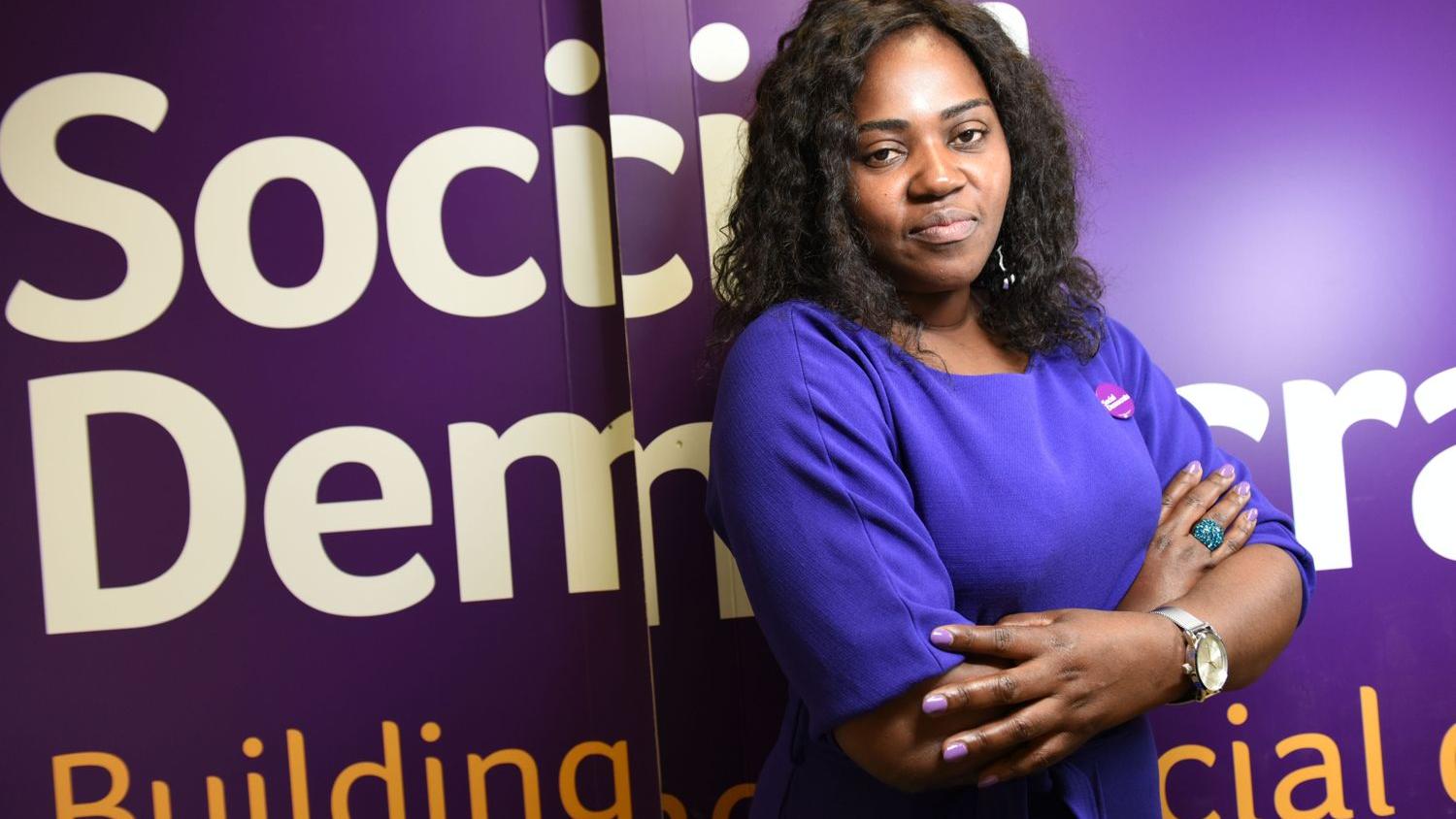 The first female asylum seeker to stand for election in Ireland has given inaccurate information about her background, The Sunday Times has established.Official details on Ellie Kisyombe’s entry into

Course they would they say that.

The Social Democrats said it would not be fair to comment on the asylum claim of its local election candidate Ellie Kisyombe, after a Sunday newspaper alleged that she had given inaccurate information about her background.

An article, published in yesterday’s Sunday Times, alleged that Ms Kisyombe, who is seeking a place on Dublin City Council in the May election, had arrived in Ireland later than she had stated in media interviews.

Ms Kisyombe, who yesterday refused to comment on the article, is originally from Malawi and has spoken of her experience of living in the direct provision system for much of the last decade.

Gary Gannon, a Social Democrat member of Dublin City Council, alleged that details of Ms Kisyombe’s asylum claim had been “misappropriated and unfairly used” and called on Minister for Justice Charlie Flanagan to investigate how the information became available.

Speaking of RTE - why is it running the Begum story???

Talk Back said:
Speaking of RTE - why is it running the Begum story???