Blog Rossport and the robbery of our Gas - Let's Never Forget!

Nobody Knows I'm A Dog

Yeah one tends to forget issues like this with everything else going on these days.

It is terrible when something slippy from media attention
D

page61 said:
It is terrible when something slippy from media attention
Click to expand...

It's the job of the media to distract us from Gombeen treason and criminality.

For all the controversy, incompetence, gombeenism, environmental threat, can someone explain in more detail the element of robbery to me please?

We have a rate of tax on the most profitable fields at 40%.

Post the discovery after the exploration licenses granted, we have licensing terms based on the rate of profit less 25% divided by the accumulated level of capital investment.

The current largest stake holder is the Canadian State pension. Do we go after them?
I can be President
OP

The original terms of the deal agreed by disgraced politician Ray Burke were highway robbery. Then Bertie made them even worse for us.
Could you provide a Link to where you got your figure for (40%) of the current terms for the corrib field please?

Because we do NOT get 40% of the profits on corrib.

The original deal was ~25% after ALL exploration costs were written off
Mostly we just get nothing, as in 2018

No corporate tax was payable on the 2018 profit because of the very significant tax losses that exist in the business. “These losses transferred to Nephin when Nephin bought Shell’s stake last year,” the spokesman said. “The consideration paid for the business would have factored in these losses.”
Click to expand...

Minister Ray Burke (later jailed for corruption) changed the law in 1987, reducing the State’s share in our offshore oil and gas from 50% to zero and abolishing royalties. In 1992, Minister Bertie Ahern reduced the tax rate for the profits made from the sale of these resources from 50% to 25%.

According to respected economist Colm Rapple, the amount of tax paid will be very low and will not be paid until many years into the operation of a gas or oil field, because the deal allows the companies to write off 100% of costs (even the anticipated cost of shutting down the operation!) before they declare the profits to be taxed. In major oil/gas producing countries, the state takes an average (median) of 68% of the value of gas and oil.
Click to expand...

25% of nothing is nothing. If ALL the profits are written off against costs then there is nothing to tax.
And they CAN be under the terms negotiated for corrib.

And corporations, if nothing else, are well known for their skills in creative accounting are they not?
we get nearly nothing basically. Whatever token amount shell choose to declare to cover their asses, we get to tax.

The fact is, only the cameroon had worse terms for exploration compared to those active in Irish waters after
disgraced corrupt politician Ray Burke ( in a room alone with shell personnel ) and then bertie "I won it on a horse, I have no bank account"ahern got at them. After he was found to have taken corrupt payments, Ray Burke's deal was still never really challenged by the Irish government.
Neither were Ahern's alterations. Terms have been slightly improved subsequently but long after the deals were done for corrib. 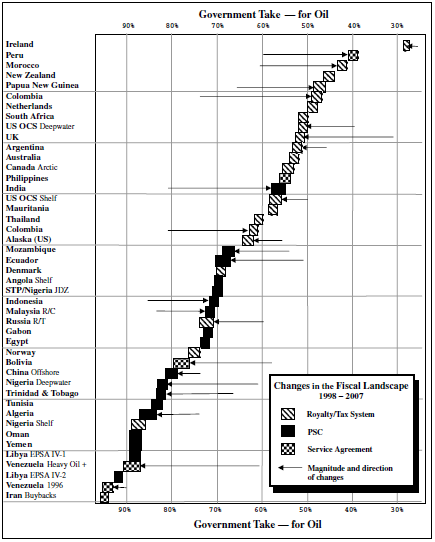 Pretty much most of the tax due is just written off against "exploration costs" etc in the deal that was made with shell. Any good accountant will see to that. Plus Ireland had no special rights to the gas and it is bought it at market rates. They can just pipe it elsewhere if they want.

Also, we have no real idea how much gas is actually being extracted from Irish wells except for the word of vested interests.
These wells are not properly monitored by the Irish government.

and have a read of the site.

and this too
www.shelltosea.com/sites/default/files/frontline_corrib_gas_report.pdf
Last edited: Oct 4, 2020
"If they can get you asking the wrong questions, they don't need to worry about the answers." -Thomas Pynchon

OK thanks. I'll look into it some more.
I can be President
OP

roc_ said:
OK thanks. I'll look into it some more.
Click to expand...

I was actually down there and met Niall Harnett (RIP)and the others. A great bunch of people.
And the stuff about gardai kicking the shit out of protesters? It is true!!

The UK police even sent their undercover provocateur cop mark kennedy stone for a visit there
before he was later outed after he impregnated an activist.

The whole bolivia / IRMS connection was pretty interesting too.

The whole thing was murky murky murky.
"If they can get you asking the wrong questions, they don't need to worry about the answers." -Thomas Pynchon
OP

"If they can get you asking the wrong questions, they don't need to worry about the answers." -Thomas Pynchon
OP

Own Our Oil. 7,240 likes · 1 talking about this. Own Our Oil is a group with no political affiliation, working to get a proper deal for Ireland from Irish oil and gas licensing. info@ownouroil.ie

www.facebook.com
"If they can get you asking the wrong questions, they don't need to worry about the answers." -Thomas Pynchon
F