Italy needs a large dose of inflation to reduce the debt burden.
Because it's not working through growth.

ITALY is the nation most likely to leave the eurozone as debt-ridden Rome continues to grapple with European Union finance chiefs over its spending, according to three analysts who spoke to Express.co.uk.

Rome has been locked in a bitter battle with Brussels over its controversial budget plans, with the latest action seeing the European Commission threaten disciplinary proceedings unless Italian debt can be reigned in. The Commission has urged Rome to make its debt more sustainable by cutting its structural deficit. Debt in Italy now stands at 132 percent, and is the second largest in the eurozone after Greece. The Commission forecast this figure will rise further to 135 percent next year. 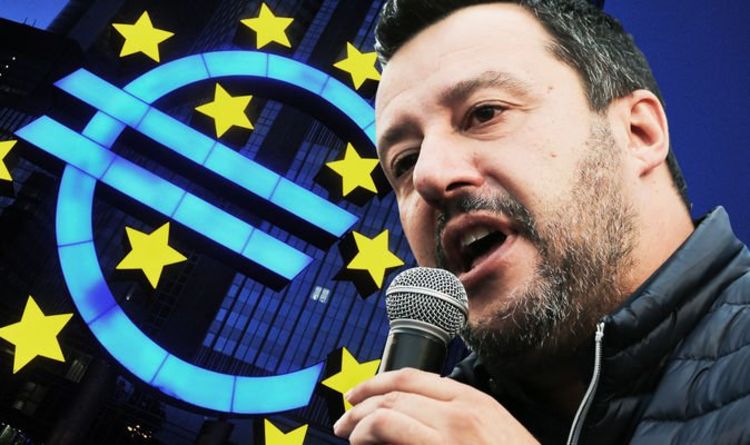 ITALY is the nation most likely to leave the eurozone as debt-ridden Rome continues to grapple with European Union finance chiefs over its spending, according to three analysts who spoke to Express.co.uk.

www.express.co.uk
Statistics on Immigration and Refugees in Ireland

ITALY risks further infuriating European Union finance chiefs after Prime Minister Giuseppe Conte said he was in favour of a broad reform that would cut taxes.

As the two sides brace to collide yet again, Mr Conte said he agree with deputy prime minister and far-right leader Matteo Salvini, who is calling for significant tax cuts. Mr Salvini has threatened to bring down the Italian government should his proposals not be met. By agreeing with his deputy, Mr Conte risks adding more fuel to the fire of the Italy-EU budget spat, with the European Commission already stating they oppose wide tax cuts if they are not offset by new revenues or spending reductions. Mr Conte told a news conference: “Salvini’s ideas are the same as mine, but I am perhaps more ambitious.”

He added the reform should be based on the principle that taxes should be lower, but everybody should pay them.

In another blow to his EU partners, Mr Conte said he could not conceive of progress in eurozone reforms unless Italy’s interests were properly taken into account.

ITALY’S deputy Prime Minister has threatened to quit the government as part of his budget battle with the European Union to push through at least 11 billion euros (39.8 million) in tax cuts.

Right-wing leader Matteo Salvini has declared: “Lower taxes or I leave the government”, which has prompted fears this could complicate Prime Minister Giuseppe Conte’s talks with the European Commission over Italy’s growing debt. The country is currently trying to negotiate a budget with Brussels to try to prevent an EU disciplinary procedure, as the European Commission wants Italy to reduce its debt this over the next two years. 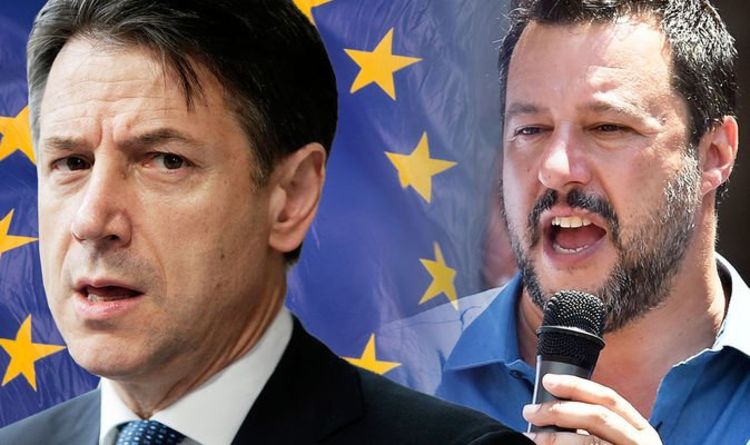 ITALY’S deputy Prime Minister has threatened to quit the government as part of his budget battle with the European Union to push through at least 11 billion euros (39.8 million) in tax cuts.

Italy vs EU: Why Salvini’s failure to back von der Leyen leaves Italy on collision course

MATTEO Salvini, Italy’s interior minister and leader of the right-wing League Party, is on a collision course with newly confirmed European Commission President Ursula von der Leyen, while his MEPs’ refusal to back her has left Italy “isolated in the EU”, experts have said.

And the episode is indicative of the increasing tensions between League and partners Five Star Movement (5SM), which are threatening to tear the coalition Government apart after barely a year. Ms von der Leyen was confirmed by the European Parliament on Tuesday - but she only won 383 votes, just nine above the minimum threshold. League’s 28 MEPs were among those who voted against her, unlike 5SM, whose 14 MEPs offered their support, exposing deep splits between Mr Salvini and 5SM leader and deputy Prime Minister Luigi Di Maio.

This is a good thread and I was thinking of starting one like it but I don't have the graphics. You will know my area of expertise is Energy and there is something going on with that in Ireland . Essentially I think Merkel has forced a set of whacky ideas on the EU without any assessment whatsoever.

Meanwhile other countries are paying their way with what is essentially fraudulent accounting. There is no financial regulation in Ireland at all. It is probably the same everywhere else. There is no underlying value for their derivatives, their wind farms, or anything else for that matter. Some companies are paying dividends to existing shareholders from new investors funds which is now legal. See this post from my dossier which is a must read. Here is an extract on Greencoat renewables,

"In the book Bean Counters by Richard Brooks published by Boomerang Books ISBN 978178649 0292 published in 2009, the author attributes the fair values accounting as one of the key causes of the world wide credit and banking bubble. In the Irish Times of the 22nd May 2019 Greencoat executives are reported as giving glowing reports of their companies performance. The adjustment of their asset values permits them to cite values which have no basis in reality by a practice which was unlawful for most of the history of accounting. The hype and positive news it conveys is fooling investors, governments, communities and consumers into supporting what is actually a pyramid selling scheme which is causing extensive damage to the environment."

Essentially what I found is that Ireland's and probably the EU's accounting system is rigged.
Last edited: Jul 20, 2019
V

Auditors in Ireland are obliged to state if they consider a company a going concern. I found examples where they neglected to say if a company was a going concern. It theses cases the companies are stone broke. It looks to me that the official and private accounts of Europe are rigged. The basic goods and services which the EU and national governments are obliged to pay can't be paid because they rely on assets which don't exist.
O

valamhic said:
Meanwhile other countries are paying their way with what is essentially fraudulent accounting. There is no financial regulation in Ireland at all. It is probably the same everywhere else. There is no underlying value for their derivatives, their wind farms, or anything else for that matter. Some companies are paying dividends to existing shareholders from new investors funds which is now legal.
Click to expand...

This is the very definition of a pyramid scheme........

Giuseppe Conte brought the 14-month coalition between Mr Salvini’s hard-Right League party and the anti-establishment Five Star Movement to an official end by tendering his resignation to Italy’s president.

In an hour-long address to parliament, the prime minister lambasted Mr Salvini, accusing him of precipitating the crisis in the hope of forcing a general election which he would have a strong chance of winning.

In an oblique reference to Italy’s Fascist past, Mr Conte said: “I heard you calling for 'full powers' and invoking (demonstrations in) the piazzas to support you, which worries me.”

Mussolini assumed so-called full powers in 1922 and went onto to govern Italy with an iron hand until he was executed by partisans towards the end of the war.

“We have no need for men with full powers, but for those who have an institutional culture and a sense of responsibility,” the prime minister told a packed parliament.

The leader of the League had put “personal and party interests” in front of those of the country in initiating the crisis, said Mr Conte, a lawyer who was appointed as an arbitrator between the coalition partners.