Islam - The Religion of Peace

A Very Merry Christmas from Islam. 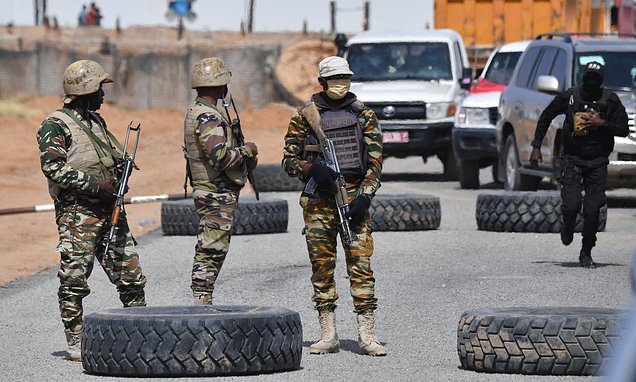 Nigerian security forces are hunting for a group of Boko Haram terrorists who massacred 10 villagers in Borno State on Thursday, shooting indiscriminately and buruning down a church.

If everyone was more like Jesus, the world would be more peaceful.

It’s nice to be back to business as usual.
Be Guided Accordingly
X

I wonder do they even genuinely even oppose zionism and mossad?
K

xtasy90s said:
I wonder do they even genuinely even oppose zionism and mossad?
Click to expand...

One of the functions of Blair Bush was to generate a Sunni Shia hatred so that the Sunni kingdoms' passage to Israel's side as an 'ally' would be eased. People can only hold so many hatreds at once, you add one more and you loosen the others. The elites of nearly all the Arab countries have no problem with zionism or Mossad.

Turks seem remarkably capable of holding many many hatreds at once. They say the Israelis are related to them, they would be another example.
X

I could sum up as much, funny how israel the state of israel and how they acquire land......AND, Still exists to this day, pakistan has the capablities, lots of middle eastern countries wield certain levels of influence and tie into each other, not just the straight up oh this is america's zog proxy countries, or oh this territory is russias, zog proxy middle eastern chunk, goes much further than that.

Even the elites in the EU seem to think israel is great.

But to this day, israel still exists.. How is this so? The arab elites might be okay with israel, but they don't even have the final say on everything. The arab world and its politics to an untrained eye is quite a crazy , nuanced, unpredictable place,I still cannot get my head around it or understand it myself fully and possibly never will.

One thing I do know is there is some sort of agreement to keep and maintain israel there, there is an agreement , not just the ''balfour agreement'' that was drawn up for the formation of that illegal state , there is a lot of will in some people in the arab world who do not like what is going on but won't fully oppose it because the truth is jews and muslims work together hand in glove and vice versa. Whether this is for short term gains or long term gains, ie forced mass immigration, of flooding europe for their own gains , I don't know but there is some agreement to keep the israeli and zog governments war machine going.

The elites of nearly all the Arab countries have no problem with zionism or Mossad.
Click to expand...

All Arab countries are ex-states of Ottoman. During and after the fall of Ottoman, the people/families/groups that accepted to work for non-Muslims were/is supported and allowed to seize/control these Arab countries. This is the reason why these govts are OK with Western countries and Israel. Arab people are in general just the opposite of their govts.
The Turk

What no Turks? You'll never recreate the empire if your relying on Moroccans to do your dirty work for you.

We will involve if it gets more serious. Like in Syria, Libya, Azerbaijan, Somalia etc...
The Turk

Denmark people and other Scandinavians should stop pretending to be the "happiest person" in the Earth. They live a shitty life. No morality, no family ties, no living in the moment mentality, no human relationship, why would someone give more importance to his her pet more than their families ? Just takes her alcohol bottle, makes her make up, burns his Quran and goes to nights, pretends to be happy while dancing, comes back to home and suicides, their kids have no idea who is their real daddy, hates his neighbor that purchased a new car, hates it when they see a migrant living better life.
The Turk
You must log in or register to reply here.
Share:
Facebook Twitter Reddit Pinterest Tumblr WhatsApp Email Share Link
Menu
Log in
Register
Install the app
Top Bottom