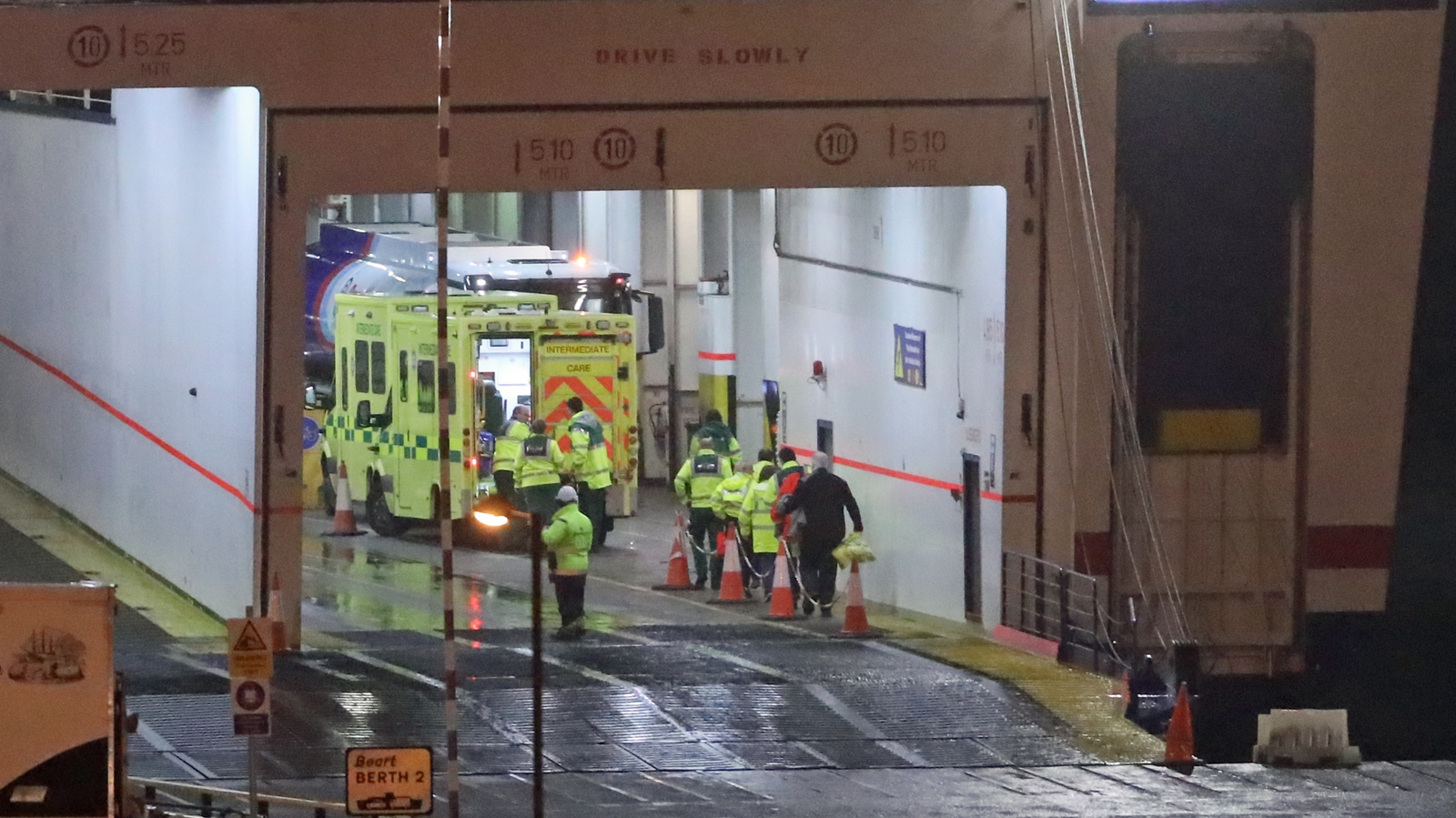 The men found in a container on board a Cherbourg to Rosslare ferry this morning are all said to be in good health and are being assessed by immigration officials.


Taoiseach Leo Varadkar has said the Government's initial response to 16 people, found in the trailer of an articulated truck on board a Stena Line ferry this morning, would be a humanitarian one, but that gardaí would need to be involved.


The ferry, which travelled from the French port of Cherbourg, docked at Rosslare Europort in Co Wexford this afternoon.


The men, believed to be aged between 20 and 40, are expected to be processed under immigration legislation after receiving medical attention.


In a statement, Stena Line said the men were discovered by a staff member during a routine inspection.


Gardaí said the truck has been seized and the driver and owners are assisting with their investigation.


Speaking in Zagreb after meeting the Croatian prime minister, Mr Varadkar said it would take time to assess the needs of the group.


It is understood the discovery of the men was made en route at around 9am by a ferry staff member who heard banging from inside the truck.


It is believed the men said they had travelled from Belgium up to five days ago.


The ship docked at Rosslare just after 2:30pm and was met by gardaí and other emergency services.


It is believed the men may be transported to different reception and integration centres once they are deemed healthy enough to travel onwards.


Sections of the Europort are shut off from members of the public while the investigation continues.


Mr Varadkar said: "Of course our initial response will be a humanitarian one, to make sure those people are well and that their health is good.


"After that of course there will need to be a response that involves the gardaí, because as you know human trafficking is illegal, and we'll need to see what happens with the people who come ashore.


"We’ll need to cross that bridge when we come to it, but the initial response will of course be a humanitarian one, to make sure they are alive and in good health."


It is believed that the people who were found are in reasonably good health and were taken to the lounge area of the ferry.


It is not known what nationality they are but it is thought they may be from Asia.


The people were found in a sealed trailer on the vehicle deck during a routine inspection.


Stena Line said: "The Stena Horizon has now docked in Rosslare" and "the 16 people discovered in the trailer are now safely in the care of the authorities who were present at Rosslare Europort to meet them.


In a statement, the company added that it will assist the authorities "in any way we can with the ongoing investigation".


Minister for Justice Charlie Flanagan said that he "was extremely concerned" to learn of the incident.


In a statement, he appealed "to anyone with any information on these nefarious activities" to contact gardaí.
Click to expand...

This makes the human traffickers into travel agencies.
M

missy said:
This makes the human traffickers into travel agencies.
Click to expand...

The men found in a container on board a Cherbourg to Rosslare ferry this morning are all said to be in good health and are being assessed by immigration officials.

FFG will bring them here, give them a wash, a free house and food and free money for life.
Paddy can swing....
Justice For The Forgotten
C

This will be used as an excuse to give non eu citizens even more access to the country.

Is that what the migration pact all about?

Unvetted travel agency.
The Regime are reckless. Their love of Plantation will ensure the common travel area we have with UK will be withdrawn.

The stowaways are from Iran, Iraq and Romania. Good grief. More Muslims and Roma .
In Hell, every day’s the same.
OP
I

Bogus refugees cheat us all.
F

Esatdigiwank said:
The stowaways are from Iran, Iraq and Romania. Good grief. More Muslims and Roma .
Click to expand...

99% are single men of military age ? unskilled, uneducated and with a head full of religious fanaticism. Great !
Last edited: Nov 21, 2019

Esatdigiwank said:
The stowaways are from Iran, Iraq and Romania. Good grief. More Muslims and Roma .
Click to expand...

Vote 4 Change said:
Unvetted travel agency.
The Regime are reckless. Their love of Plantation will ensure the common travel area we have with UK will be withdrawn.
Click to expand...