how many people have irish citizenship yet do not :

- speak English nor irish
- have any irish family or friends
- contribute much taxes to the irish State
- know anything about irish history, culture, values, beliefs, etc
- even feel any warmth towards the irish nation ?
T

FF/FG/Lab/SF..stitchup said:
how many people have irish citizenship yet do not :

- speak English nor irish
- have any irish family or friends
- contribute much taxes to the irish State
- know anything about irish history, culture, values, beliefs, etc
- even feel any warmth towards the irish nation ?
Click to expand...

I have been singing that song for years.
The useless lazy journalist class has never devoted one second to investigating the naturalization process in Ireland, the laxest in Europe.
T

I read in yesterday’s newspaper that someone called Lee Child had expressed dissatisfaction with being British, and was now becoming an Irish citizen. I had no idea who this person is, indeed I didn’t know whether Lee is he or she. Looking it up, I find that Child is some kind of male English novelist.
I suspect most readers here agree that it is time to tighten up on Irish citizenship rules. But perhaps we have paid insufficient attention to the government’s complicity in the abuse of Irish citizenship by foreigners abroad, those who have some tenuous family connection with Ireland that allows them to get an Irish passport. Why are we allowing Ireland to be used for a passport of convenience by people with no interest in our country? Will this fellow Child now move to Ireland, to engage and live with the rest of the Irish nation? A thousand bux says he won’t.

I have also noticed an American blogger describing how he acquired Irish citizenship. He’s a travel writer, so he tells us that it’ll be easier to get into places like Bolivia with an Irish passport than with his US version. Again, he offers not the slightest evidence of knowledge or interest about Ireland, except for a stupid reference to Guinness. 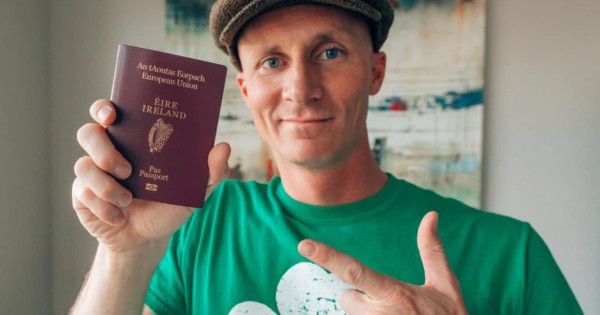 How I Became Irish: Claiming Dual Citizenship By Descent

For years, whenever I met someone from Ireland, I'd proudly proclaim to them "I'm Irish too!" Now I really am.
expertvagabond.com

Check out his site. And scroll down to the 100+ comments. Their attitude to taking out Irish citizenship is mercenary and selfish and quite offensive to anyone who cherishes the ancient tradition of Irish nationality. Almost none expresses any level of interest in Ireland. Indeed one fool refers to the “Republic of Erie”. Some English woman is angry about Brexit. She has apparently never been in Ireland in her life, but she’s against Brexit, so is taking out Irish citizenship. The EU passport theme is repeated by quite a few.

We know that the Irish government has a sloppy and disrespectful attitude to Irish nationality. They are complicit in the abuse of Irish citizenship by charlatans both inside and outside our country.