Hot "DEUTSCHE BANK WATCH" GERMANY "THE DYNAMITE IN THE EUROZONE" IS TOTALLY INSOLVENT - TRILLIONS IN HIDDEN DEBT!! IT'S THE NEXT GREECE!!

It sounds a bit panicky pushing this announcement out over a weekend doesn't it?
J

TheWexfordInn said:
It sounds a bit panicky pushing this announcement out over a weekend doesn't it?
Click to expand...

Very. The right time would have been when there was coverage over Merkel's health.
Regards...jmcc
M

TheWexfordInn said:
It sounds a bit panicky pushing this announcement out over a weekend doesn't it?
Click to expand...

jmcc said:
Looks like Lehmans Brothers 2.0 first for the EU and then for the global economy. All the wonderful EUnuchs in Dail Eireann will be rushing to destroy Ireland in order to prove their credentials as good "europeans". And the Irish people will get f*cked over once again. It is hard not to be cynical with this stuff.
Click to expand...

anybody who gets fucked over again its their own fault
they seen what happened the last time
but people are like lemmings they run to the cliff every 7 years and jump off
and 7 years later do the same thing again
economics is about human behaviour, and people are stupid
I

Might be a good idea to stock up on food water and medicine just in case.
V

I know a man who sold his family business here. It was a well known business trading for over 150 years and he sold it
at a time when a lot of similar businesses were being sold to bigger buyers. The business is still there, but its in a sector that is somewhat in
decline. He got a good few million and it was well publicized. A while later I met him and he told me he was invited to Germany and was wined and dined by a big company there. He was all praise about how efficient the Germans were.

Anyway I don't be talking to him much now, but I see him out walking and I don't see any of the trappings of wealth about him. He does not appear to have much to say at all. No new car either. I read in the Financial Times last week that at the exact same time, Deutsche Bank set out to gather in money quickly. It was going under in some of its ventures and needed a lot of cash urgently. I am now beginning to think it got all this man's money. Cleaned him out.

The front page of Monday's FT isn't exactly pleasant reading. DB seems to be attempting an Namacisation. 74B Euro into a "bad bank".

jmcc said:
Looks like Lehmans Brothers 2.0 first for the EU and then for the global economy. All the wonderful EUnuchs in Dail Eireann will be rushing to destroy Ireland in order to prove their credentials as good "europeans". And the Irish people will get f*cked over once again. It is hard not to be cynical with this stuff.
Click to expand... 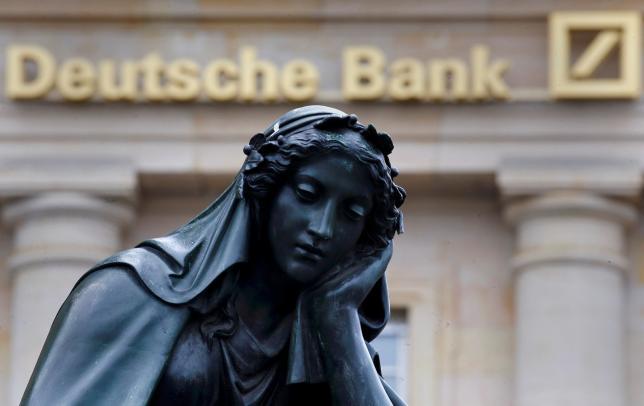 "The Deutsche Bank As You Know It Is No More": DB Exits Equities In $8.4 Billion Overhaul, To Fire Thousands

The bank which only a decade ago dominated equity and fixed income and sales trading and investment banking across the globe, and was Europe's banking behemoth, is no more.

Looks like "we all partied" again. Irish taxpayers, prepare to receive another EU bankster bill....without lube!

We should have voted for Hermann!!
"If they can get you asking the wrong questions, they don't need to worry about the answers." -Thomas Pynchon
V

Another big factor with no history is the green agenda. We never had a period when the production of energy by the simplest means
possible was labelled as anti social, sick, damaging to the weather and government set out to stop its production.

I seems that governments actually believe weather based renewables can replace fuel and they are actually trying to ban the use of fuel.

Renewables don't replace fuel so if fuel is partly banned, the impact will drive participants back to the stone age. If the EU and Irish government
do succeed to some degree in replacing petrol and diesel vehicles with the horse and cart a depression of unprecedented proportions will result.

The object of the EU is to reduce co2 emissions drastically within its own borders by driving the burning of fuel away to Indian and China etc. They don't seem to mind how much emissions are pumped out provided it is not in the EU.

Dublin 4 said:
Except you're lying & the EU is more unstable than ever...
Click to expand...

I can say Ireland's wind energy finances are based on a total lie, if this is common then its just a matter of months for it all to
implode