Video Christians Are Being Persecuted Around the World

When a militant atheist is highlighting this you know it's bad.
E

Here is some information about how the UN and the UK are complicit in the persecution of Christians in the Middle East.

The article in full can be found here: UN, UK Treating Persecuted Christians as "Enemies"

The United Nations Refugee Agency appears to be committed to blocking persecuted Christians from receiving any assistance. According to a recent CBN News report:

Christian Syrian refugees ... have been blocked from getting help from the United Nations Refugee Agency, the UNHCR, by
Click to expand...

Muslim UN officials in Jordan.
One of the refugees, Hasan, a Syrian convert to Christianity, told us in a phone call that Muslim UN camp officials "knew that we were Muslims and became Christians and they dealt with us with persecution and mockery. They didn't let us into the office. They ignored our request." Hasan and his family are now in hiding, afraid that they will be arrested by Jordanian police, or even killed. Converting to Christianity is a serious crime in Jordan.
Click to expand...

According to Timothy, a Jordanian Muslim who converted to Christianity, "All of the United Nations officials [apparently in Jordan], most of them, 99 percent, they are Muslims, and they were treating us as enemies."
Addressing this issue, Paul Diamond, a British human rights lawyer, recently elaborated:

"You have this absurd situation where the scheme is set up to help Syrian refugees and the people most in need, Christians who have been "genocided," they can't even get into the U.N. camps to get the food. If you enter and say I am a Christian or convert, the Muslim U.N. guards will block you [from] getting in and laugh at you and mock you and even threaten you.... Sunni Muslim officials have blocked the way. They've laughed at them, threatened them, said 'You shouldn't have converted. You're an idiot for converting. You get what you get,' words to that effect."
Click to expand...

The next obstacle facing those few Christians who make it past UN refugee camps are the immigration centers of Western nations themselves. The discrimination is apparently so obvious in the United Kingdom that Lord George Carey, a former Archbishop of Canterbury, is suing the UK Home Office for allegedly being "institutionally biased" against Christian refugees and therefore complicit in what he calls "the steady crucifixion of Middle East Christians."
Click to expand...

and this from same article:

----Discussing how "visas were granted [by the Home Office] in July [2016] to two Pakistani Islamic leaders who have called for the killing of Christians accused of blasphemy," Dr. Martin Parsons, a human rights activist, expressed his frustration: "It's unbelievable that these persecuted Christians who come from the cradle of Christianity are being told there is no room at the inn, when the UK is offering a welcome to Islamists who persecute Christians." ----

Revolting !
There's much blathering about hate speech, hateful action, etc in the liberal media.
Still no mention of the premeditated hate enacted against Christians worldwide.
Given the facts.
This is cowardice and hateful indifference from the same people who would lecture everyone else on hatecrime without a trace of irony or reflection.
It's only a bit of chat and banter. We're not the World council.

jpc said:
Revolting !
There's much blathering about hate speech, hateful action, etc in the liberal media.
Still no mention of the premeditated hate enacted against Christians worldwide.
Given the facts.
This is cowardice and hateful indifference from the same people who would lecture everyone else on hatecrime without a trace of irony or reflection.
Click to expand...

Indeed. Not surprising, though.

The more vocal and obnoxious liberals despise Christians, and Catholics in particular. Go on to Boards.ie or politics.ie and look at the abuse meted out to Catholics on a regular basis.

I recall the poster Blokesbloke (Gay English chap. Sound as a pound) over on p.ie once expressing his shock at the level of vitriol and abuse aimed at Catholics on that site. I haven't been on there for a few years, so I've no idea if it's still as bad.

As the third world, read Islamic, influence grows in the 'UN'.. a contradiction in term as well as it's actions, you can expect lot more whining about the put upon muslims while the overt and the sneaky war on Christianity continues..

I don't agree with a lot of what D Trump says but on the UN he's dead right..
E

There is a little known but very active and dynamic Irish charity called "Church in Chains". It is an Evangelical Christian organisation based in Glenageary, Dublin, and it campaigns equally for persecuted Christians of all denominations.

They are well worth following and supporting.

Their accounts are available on their website and the main organiser is David Turner who does enormous work and is on a very modest salary (very unlike some other top guys and girls in other charitys).
K

Much of the Third World has the same ethics as it had 100 years ago. There is no pressure on them to change.

It is the civilised parts of the world that are being ordered to accommodate the Third World ideas.

In time it will all be as the Third World everywhere - i cannot see any country making strides towards peace and advanced ethics the US is barbarian, EU is going backwards, as many wars move through Africa as ever, renewed sectarian hatred in India and China, South America is again falling into Reagan era darkness of dictators and coups - thirty years ago there were quite a few such countries that moved towards peace and justice. The nations shaped by Christ's influence tend to move towards peace and justice faster than the other types.
E

Rev. Lawan Andimi is chairman of the Christian Association of Nigeria, and was abducted by Boko Haram on 2nd January this year.. He is just one of many hundreds of Christian children, women and men kidnapped and held by B H in Nigeria. The silence on this outrage from most of the Christian world is shameful.


Here is a propaganda video B H released of Lawan Andimi:

More harrowing attacks which won't be reported by the MSM:

On Christmas Day, ISWAP (Boko Haram) killed eleven men they said they had “captured in the past weeks” in Borno State. On 26 December, they sent a video of the murders, produced by Islamic State’s Amaq news agency, to journalist Ahmad Salkida.
Click to expand...

On 26 December, the Shekau faction of Boko Haram killed bride-to-be Martha Boulos, her sister Zainab and five friends in an ambush as they travelled from Maiduguri to the bride’s home town in northern Adamawa state for the wedding, which was planned for 31 December. The terrorists stopped their vehicle and beheaded them on the side of the road.
Click to expand...

On 22 December, two buses on Munguno road in Borno state were attacked by terrorists from one of the factions (it is not known which) who released Muslim passengers but held back Christians and killed two men, including a pastor from Deeper Life Bible Church. The militants abducted a relative of the pastor and two aid workers.
Click to expand...

More details of these and other attacks from Church In Chains here:

eamo said:
Rev. Lawan Andimi is chairman of the Christian Association of Nigeria, and was abducted by Boko Haram on 2nd January this year.. He is just one of many hundreds of Christian children, women and men kidnapped and held by B H in Nigeria. The silence on this outrage from most of the Christian world is shameful.


Here is a propaganda video B H released of Lawan Andimi:

More harrowing attacks which won't be reported by the MSM:

More details of these and other attacks from Church In Chains here:

More of this information.. Please..

If you consider yourself a Christian you have a duty to shove as much of this information as you can in the faces of immigration facilitators like gombeen property owners, local Regime lackeys and Globohomo fan boys.

If you consider yourself a Christian then we have a duty as Christians to speak for others who have been silenced... by the Regime's current faves.. muslims.. Whose current Irish population the Irish government says is (cough) 64000..double that I'd say. The 'government' also say the population of muslims here is doubling every decade..

There's not a single Islamic country which is not a human rights shithole, repressing and discriminating against non muslims in one way or another..

And we are bringing them here ...so that they can do what they do ..everywhere else they are...

Dancing boys. FGM, grooming raping gangs and Islamic terrorism are what they'll bring... It's what they're bringing everywhere else.
Last edited: Jan 10, 2020

Everyone is been persecuted around the world..Christians have not got a monopoly
O

It would better if the OP opposed the persecution of Christians on this island. For decades Catholics have been murdered and attack because of their religion. And them we find the swivel eyed alt-right loons invite those very same murderers down to a protest in Barrow Street. Such hypocrisy. 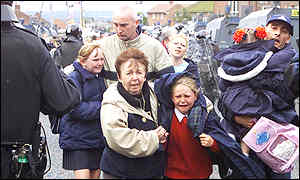