Funny that these stickers should appear just as they are talking about bringing in "hate speech" laws. 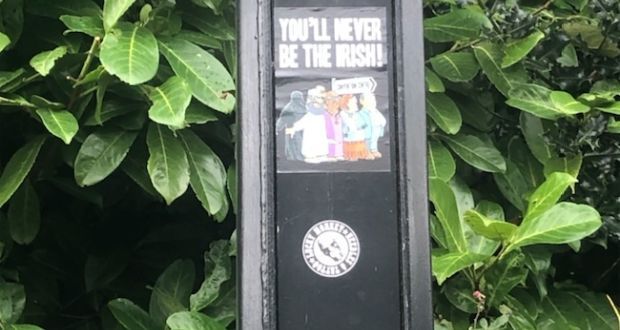 The placing of dozens of anti-immigrant stickers on electricity poles along a busy roadway in Killarney, Co Kerry has been condemned by the local chamber of commerce.

Gardaí are investigating after the racially-themed stickers were spotted on Tuesday along the Muckross Road, which leads to a number of hotels and guesthouses in the tourist town.

The high-gloss notebook-sized stickers feature cartoon images of a group of migrants – including caricatures of Muslims, a man from Asia, a Roma woman and a person from Africa – under the heading “You’ll never be the Irish”.

The stickers also feature a signpost with the words “Convention Centre” which is seen as a reference to the fact that a number of citizenship ceremonies have taken place in Killarney in recent years.

Killarney Chamber of Tourism and Commerce condemned the stickers in the “strongest possible terms”. It criticised “the mindless and completely unacceptable actions” of whoever was responsible for placing the “racist, vulgar and pitiful slogans in a public area, under the cover of darkness”.

“Such dreadful behaviour has no place in the progressive and successful town of Killarney where there is a warm, genuine and universal welcome for everybody,” the chamber said in a statement.

“We appreciate the enormous contribution made by people from overseas, over several decades, who come to live and work alongside us and become our neighbours, friends and colleagues and our children’s friends, classmates and teammates.
‘Ugly weapon’
“Racism is an ugly weapon that must have no place in society and as long as mature, decent and responsible people stand up against the uneducated bullies that engage in such unacceptable acts, then they will have far more limited opportunities to spread their hatred.”

“It is absolutely disgusting and disgraceful,” he said. “Of all the towns in the country for this to happen in, you would think that Killarney would be the last given that we have so many overseas staff employed in the tourism sector and doing such a wonderful job.”

Mr Murphy reported the matter to gardaí and Kerry County Council and he is waiting to see what action will be taken. “We went out and peeled off many of the stickers but there are still so many of them out there. It’s ignorant and it’s racist and whoever did this is just pure stupid.”

How dare the natives object to their replacement.

So the Gardai can investigate this, but not assaults on Irish politicians and activists.
OP
I

Its probably a false flag those stickers only play into the enemies hands.

IrishJohn said:
Funny that these stickers should appear just as they are talking about bringing in "hate speech" laws.

Yes Guard!. It was one of your buddies doing a nixer for another buddy in Finnna GeFLab.
OP
I

El Chaval. said:
So the Gardai can investigate this, but not assaults on Irish politicians and activists.
Click to expand...

They are a Political Police force.
F

will the cops throw millions of quid worth of resources at catching the baddies who criminally 'put up a sticker' ?
C

Stickering cities is a great idea. If they had information to let the public know things they would not read in mainstream news.
Imagine walking to work seeing 1\3 of those on housing lists in our capital are non Irish Nationals...you think that would sit well with anyone?

Or the fact were shovelling cash over to other countries fir people children every month through child benefit??
Stating facts and figures on immigration,handouts etc is not "racist"....yet

IrishJohn said:
Funny that these stickers should appear just as they are talking about bringing in "hate speech" laws.

Very convenient for the narrative of the MSM.
Just like the guy doing the Nazi Salute not long ago.
It's only a bit of chat and banter. We're not the World council.
E

What's the problem with the stickers.
F

El Chaval. said:
What's the problem with the stickers.
Click to expand...