A Japanese asteroid-sampling probe is about to get up close and personal with its target space rock.

The Hayabusa2 spacecraft will drop two tiny rovers onto the asteroid Ryugu this week, possibly as early as Thursday (Sept. 20), if all goes according to plan.

The Hayabusa2 team began prepping seriously for the epic maneuver last week. The current schedule calls for the mother ship to descend toward Ryugu today (Sept. 19) and for the two little disk-shaped robots, known as MINERVA-II1A and MINERVA-II1B, to deploy as early as tomorrow, U.S. time. (Officials with the Japan Aerospace Exploration Agency, or JAXA, have cited Sept. 20 and Sept. 21 for these events, but that's apparently on Japan time, which is 13 hours ahead of U.S. Eastern Daylight Time
Click to expand...

Each MINERVA-II rover measures 7 inches wide by 2.8 inches tall (18 by 7 centimeters), with a mass of about 2.4 lbs. (1.1 kilogram). And they won't "rove" in the traditional sense; instead of rolling along on wheels like a Mars or moon explorer, the duo will hop from place to place on Ryugu
Click to expand...

Amazing and they are tiny, if there is ever alien life discovered out there it will be by a robot.

Good Luck to all involved

The Bots are the way will conquer the Solar System
Deus Vult
Ireland in History Day by Day
irelandinhistory.blogspot.ie
OP

They Made It! Japan's Two Hopping Rovers Successfully Land on Asteroid Ryugu

They Made It! Japan's Two Hopping Rovers Successfully Land on Asteroid Ryugu


We are sorry we have kept you waiting! MINERVA-II1 consists of two rovers, 1a & 1b. Both rovers are confirmed to have landed on the surface of Ryugu. They are in good condition and have transmitted photos & data. We also confirmed they are moving on the surface Beautiful image showing the shadow of Hayabusa2 on the surface of Ryuga.
D 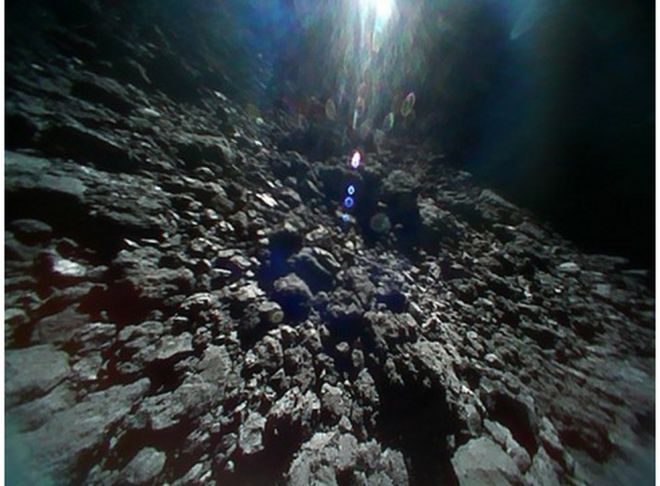 Just listening to this on radio, reckoned to be Billions of Dollars worth of minerals in this meteorite, Wonder how difficult it would be to mine this? Slow it down and guide it into a controlled landing on Earth?